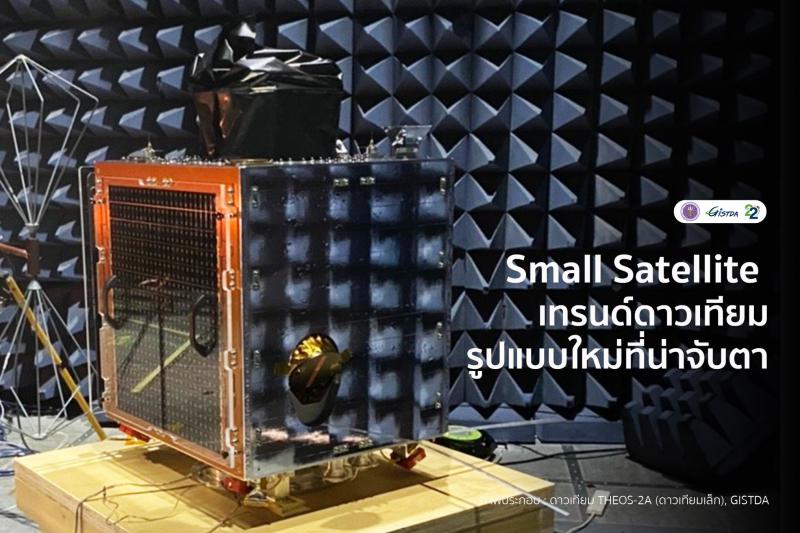 The satellite industry is in a period of change to step into the space economy with private sectors who drive this making the satellites increase considerably in orbit. Especially the small satellites in low orbit together with technology and ground innovation. This is a remarkable evolution.

How interesting are small satellites?

Smaller satellites have lower development costs. This makes entrepreneurs gain more access to development and use. As a result, a large number of satellites were sent into orbit. Especially in low orbit (LEO), where the distance between the satellite and the ground is shorter. This results in further development of efficiency in utilization with more ground-based technologies and innovations. This attracts more investors and start-up owners to invest and develop the satellites for economic reasons, which can increase the ability in competition and efficiency of products with lower cost. This will also benefit users and the country itself.

The growth of the small satellite industry

The small non-stationary orbit (NGSO) satellite industry has grown rapidly over time. According to the UK's Small Satellite Market Intelligence Report Q1 2021, a large number of NGSO satellites will be launched in 2020. It is the most communication satellite with nearly 1,000 satellites, followed by about 100 resource survey satellites. In the first quarter of 2021, more than 600 small communication satellites were put into orbit, a huge increase compared to the past 10 years.

The application of NGSO satellites is growing significantly in the world's space business with the advantages of production processes, budgets, and flexible usage patterns as well as being able to innovate further to support various small businesses and have easier access to the production of small, low-orbit satellites. This is considered as another milestone that may be used as a replacement for fixed orbit communication satellites to reduce the budget of Thailand as well as to expand access to development and utilization for many sectors.

Thailand with the development of small satellites

The direction of Thailand’s space is near the full economic era, aiming to develop the aerospace industry ecosystem and reduce the dependence on other countries’ technology. This also supports innovation development to improve labor skills to develop the satellites, materials, ground system, and transportation which can rely on domestic advanced technology to obtain added value from utilizing space technology from upstream to downstream industries. This leads to a space economy ecosystem in the country.

In terms of small satellite benefits, today Thailand has established rules and procedures for licensing the use of foreign satellite channels in-country service which supports digital development for agricultural and industrial sectors. It is still in the process of studying by relevant agencies to propose suggestions for policy, regulatory authorization, and guidelines for promoting competition of non-stationary orbit (NGSO) satellite services in Thailand.

GISTDA has developed a small satellite which is an Earth observation satellite under the THEOS-2 SmallSAT project, where Thai satellite engineers play an important role in designing and developing with foreign organizations with expertise. They are also famous for space technology by SmallSAT or Theos-2A satellite which has various functions like pointing at interesting areas and adjusting the angle to create 3D Data and track the accurate location of ships and planes.

Moreover, GISTDA also continues to develop small satellites on the ground for any people who are interested without charging any baht. This is to pass on the world knowledge and expert skills to people which will lead to full ability so they can drive the space industry in Thailand in the future.

At present, the THEOS-2A small satellite created by a Thai engineer team in 2019, has been completed its assembly and testing in England, which is scheduled to send to Thailand for Assembly integration and testing: AIT at Rangsan Park, space Innovation, Sriracha District, Chonburi province in June before being launched into the orbit by 2022. You can follow for more updates on the THEOS-2 project on our Facebook Fanpage – GISTDA.