The previous part described about Vegetation Phenology graph evaluation. The initial process is Interpolation and calculation of Vegetation Index in Smooth format. As for part 6, it explains the second step. Curve fitting process will be used to evaluation graph for the purpose of reducing Vegetation Index graph complexity and can be used in enquiring the period of automatic cultivation. Picture 1 is showing example of Vegetation Index graph and Curve fitting which could be estimate by using Fourier series.  Refer to the initial research, the result in enquiring and finding period of cultivation will have high effectiveness when estimated with Fourier series equation [1]. As for other format of equation, there is possibility which needs to conduct more research in the future.

After obtaining Curve fitting which has been estimated by Fourier series, the next step would be specifying points, which are Local minimum points; “The Specific Minimum Point” of graph by using mathematical method. Each Local minimum point will be considered whether if they are in the suitable level or not (the one that has level of Vegetation Index higher than Threshold will be deleted; the value is more than 205 of maximum value which could be observe as “the point over dashed line level”). As showing in picture 2 is based on a hypothesis that period of rice cultivation graph will increase Vegetation Index from low level to highest level at growing period (plenty of green color) and will have lowest value during harvest period. Minor declining value from high level is considered as unfinished cultivation cycle; therefore, Local minimum points that have “Minimum level of Vegetation Index” will be used in separating Sub curves (Subgraph) as showing in picture 3. Graph used for consideration could be divided into 5 Sub curves. 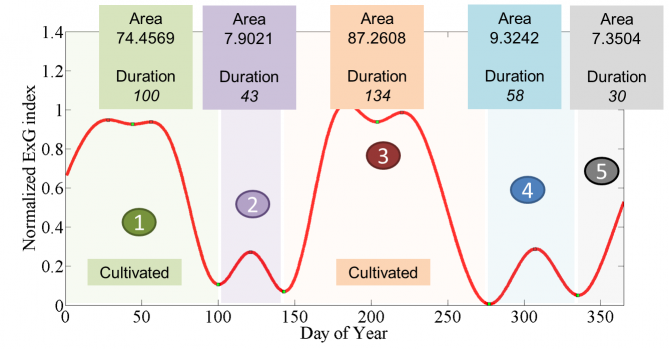