In camera or film photography system, the electromagnetic energy will react with chemical substance that is coated on film, resulting on the variety of energy and waves received. When developing the film which shows the difference and level of color. It is able to develop and enlarge the photo in black and white, and color, namely, camera that can record wavelength between 0.3-0.9 micrometers only. The high performance camera can provide aerial photograph with high resolution at 0.01 mm. Aerial photograph interpretation normally requires only 0.1 mm resolution, for example, in 1:50,000 scales equal 5 meters of the real phase on the ground. And in 1:6,000 scales will equal 0.6 meters to the real phase on the ground. The resolution of the photo comes from the alternated black and white line one by one. The unit is the number of double lines per mm (double lines/mm). The standard of a square with the alternated color of white and black is used in photographic film or aerial photograph which is seeable and can be clearly separate for eyesight. Aerial photographic film has high resolution at 100 - 150 double lines/mm. As for a special kind of film, the resolution is high at 450 double lines/mm. However, many factors in aerial photography such as ISO camera or movement during taking photos changed the resolution of Aerial photograph. A large scale map has been used in aerial photograph due to the fact that it gives high resolution and easily provides the correct ground measurement, and also the interpretation with eyesight and the easy fundamental tools. Moreover, Space shuttle and sky laboratory including Russian spaceship also install camera system.

It is a receiving machine that record electromagnetic energy from outside or the nature. The important natural energy resource is the sun; the remote sensing system has been extensively used.  The system that is widely used is the one with sweepingly file in many periods of waves, which will possibly use in recording information in various waves. (0.3-14 mm. /micrometers) There are 5 types of Line scanners as follows.

This system records data by using Instantaneous Field of View (IFOV) to receive the information and write down in the machine. The intensity value of each spot on the photo will be shown. 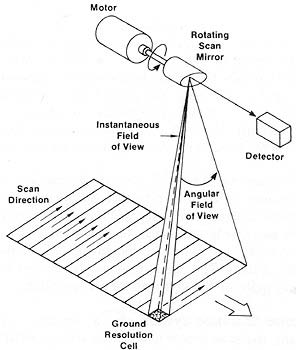 Data in each roll will be separately recorded at the same time by Detector of each machine. 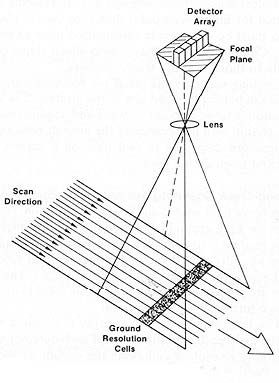 This scanner is for Meteorological satellite with Geostationary Earth Orbit or fix above the earth all the time; can’t move to record the earth’s photograph as desired. One method that used in recording the photo is that Meteorological satellite revolving around itself in north-south axis in order to scan the lower part of the earth. In each round, it can scan only one line which is east-west line, and adjust IFOV in the next round in order to scan all of the desired side. 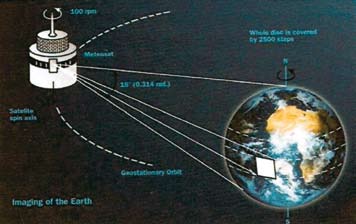 This scanner captures the photo in circle or oval range. If the circle is in vertical, the camera angle and IFOV value will be stable. It is normally used for Meteorological satellite. This sensor works in the period of which the infrared radiation and microwave that have a rough resolution at about 1 and 50 km respectively. For example, satellite data from TRMM (Tropical Rainfall Monitoring Mission) which records the information in 5 wavelengths of microwave with 50 km resolution. The data is used to study a temperature of the sea surface, the wind surface, the steam in the atmosphere, the volume of water in the cloud, and the rainfall rate. The ERS 2 satellite has sensor system in ATSR which is cone shape scanner. It works in 7 band of wavelength. In the range that infrared radiation is able to perceive by eyesight, this cone shape scanner can record the surface of the earth in the contrasting oblique cone in vertical. And record the photo forward using only 2-3 minutes. It can adjust the effect from the atmosphere, therefore, result in measuring the sea surface temperature; the validity of the information is from only one time measurement.

These sensors create energy then transmit to the target object, and receive the reflected energy back from the object. The well-known one is Imaging radar which is the Active Electronic Sensor. It records the information in the wavelengths between 3-12.5 GHz (the wavelengths between 2.4-100 cm.) Imaging radar produces and transmits microwave signal to target object and receive the reflected signal. This process requires Antenna to singly act between transmitting and receiving signal alternately. The reflected pulse back from the target object will be recorded for further analyze.

Lidar system consist of scanner that transmit and receive Pulse laser reflected to satellite system to search for the height of recording machine and IMU in order to measure the posing of recording machine. It is the Active Electronic Sensor using moderate level of laser in shorter wavelengths in seeable range of eyesight and adjacent infrared. It has high efficiency on measuring the height of the surface correctly in order to simulate the numerical height with accuracy about 15 cm. in vertical. The example of measurement is the height of the top canopy of tree which is relevant to the surface, the depth of water that is relevant to the water surface. Moreover, this system has been using in studying on particle in each atmosphere of the earth, and the density of air, including monitoring the air current.

There are 3 technologies featured in Lidar;
– The correct distance measurement by laser.

– The Earth location indicator system to search for geographic location and height of sensors.

– Aircraft position measurement by using IMU (Inertial Measurement Unit) in order to pose the sensor accurately. It is normally use with the earth location indicator. Anyhow, data processing of Lidar requires a computer which has high capacity and a large storage unit.