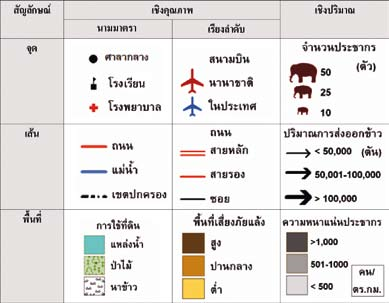 Designing map begins with map size specification; then map elements are arranged like setting up newspaper pages. It is called Map Layout. Map design steps are as follows:
Firstly, specifying presentation media such as electronic media or printing media. Production methods influence on map design methods selecting scale and map scaffold type to serve the map objectives. Then, analyzing map content and symbols. After that map templates and elements are assigned based on its principles and map design methods. There are few elements used for specifying map elements:

Map content is the most important element because it consists of major content that is always laid out at the Visual Center of map margin, and it must be the most prominent element and cover majority of map areas.

Neat line is usually a thin line, and there are thick lines at the margin called Border Lines. Numbers indicating map location presents map content; it is between border and border line. It is not necessary to be in the form of geometric shapes; it can be shaped as real areas such as watershed line. However, this type of line causes the areas to be similar to island called Island Map. To avoid using it, surrounding areas as background should be also shown.

Title is the second important element inferior to map content. Map name must be concise and serve map content. It must not be wordy; for example, changing from ‘map presenting density of population’ to ‘density of population’. If the map content shows specific date and time, specify it on the map. If the map name is too long, it can be divided into major and minor names; for example, the major name is ‘age structure of refugees in 2005’; the minor name may be ‘Thai-Myanmar Border’ that is on another line at the center position of the major name.

Legend is the third important element inferior to map content and title. It consists of symbols and symbol description. Any symbols appeared on the map must always have its legend and the same characteristics. Legend heading design of thematic map does not use the word, ‘legend’ or ‘symbols’.  If there is a demand to exemplify the map name, bring it to replace the word, ‘legend’; for example, if the map name is ‘age structure of refugees in 2005,’ legend heading is number of refugees. There must be lines covering the word ‘legend’.

Map maker and date should be presented at the border line because it can be used as reference. Text size should be small because it is an inferior important element.

Numbers and graphical bar scale are specified, but it always has graphical scale for prospective shorten or enlarged map. Variable Scale is used with world map scale changing based on Latitude. Some types of software do not have scale; therefore, it is sometimes excluded. The scale is an inferior important factor; therefore, it should not be too prominent. Nevertheless, it must not be too small; otherwise, it can difficultly be used. Scaling must then consider the map balance.

If there are not direction symbols presented on the map, it is certainly that the top position of map is the north. If the size of map content is not proper, the north may be in another direction. However, there must be a specified north direction symbol presented in the map. Meridian Line is a northern line. If this line is in different direction, the north symbol must be presented. The direction symbol is an inferior important element; it should not be too prominent, too colorful and too big.

Geographic Name appeared on some types of map such as detailed geographic map. There are steps to properly name geographic points, lines and areas on the map as follows:
3.1 Specifying permanent locations that are difficultly changed such as Spot Height.
3.2 Specifying point symbols such as name of the town that might consist of movable barriers. There are 9 positions for specification (the fifth position is a point symbol) such as specifying the third position. It should be kept permanently. If there is geographical limitation as a handicap – name of village by the water that should be in the same side with its position, it must also be considered (the fifth position is specified overlaid another; thus it is not appropriate for specifying point symbols).
3.3 Specifying name of line data such as road, river, and geographic structured line parallel with line range. If it is wide enough, put the name between the lines.
3.4 Specifying name of data in the areas based on area shapes and putting it at the center. After that the appropriateness of map must be checked. The names should be in the space

– it should not be in just only in some particular areas to make balance, avoid specifying name overlapping with important data. Moreover, font size must be appropriate, the use of similar colors with name’s color should be avoided. If it is necessary to specify names overlapping with symbols, Halo should be used to ease map reading. In addition, the names must be correctly spelled and communicable.

Mapping is the last step of spatial data analysis process. Although these days there are software to ease designing and making map quickly, significance of map design should not be ignored.  Map is a medium presenting spatial data, which is a significant academic document used as a research instrument revealing research findings and for geographical data communication. Do not look at it as only illustration. Mapping consumes time for planning that does not demand the use of computer since it presents interpreted image data. As a result, map should be quickly understood, especially quantitative data. However, some types of maps such as geologic map consisting a lot of data must be critically read to make understanding about its symbols’ meanings so that the readers can understand characteristics of each area as aimed.  If map transfers ambiguous or incorrect information, it influences on misinterpretation. Good map design should firstly have clarity, having clear concepts and clear understanding about spatial phenomena. Then important data representing characteristics of areas are selected, map content analysis serving the objectives. Moreover, map symbols must be clearly designed. It must be appropriate with real areas, symbols and captions are not overlapping laid. Therefore, it can be easily seen and read – it does not consist of too much information. It facilitates map users’ observation and quick access, and the readers are able to recognize characteristics of map data easily.  Map design consists of designing principles: Figure-Ground, Visual Balance, Contrast and Visual Hierarchy.

1. Figure-Ground emphasizes major image is different from background that is as a backdrop. The major image is more important and prominent than background due to its different color shade, density and design. Meaning of image on the map is main map content while background is as supporting detail used to ease making understanding the content without interrupting it.

Formal Balance refers to setting up map elements at the map center and make them balanced; for example, specifying names on the map and putting map content at the center position while putting low-level element data at the left and right sides equally. Formal Balance is usually used with design of map set such as geographic map since areas of map content are designed in the same size, almost the same shape of square.
Non-Formal Balance refers to setting up map elements spread to space, but when it is completed, it is balanced. This balance is usually used for the map, but map content areas, especially small scale map are not geometric shapes such as provincial areas, basin areas, etc.

3.  3. Contrast refers to intersection of map features that causes difference of each feature. It affects map symbol design or physical variables – color, design, shape and shadow, for differentiating differences of each feature based on purposive data analysis. Outstanding feature design causes visual hierarchy or prior interesting point.

4. 4. Visual Hierarchy occurs when putting map symbols and elements based on hierarchical significance of prominent areas. Map data should then put based on its significance, which consists of two elements: map element order and map content order.

Normally, visual point of interest at any specific areas is the clearest and the most attractive point at the center of immediate vision called Visual Center. It is at almost the center of map areas (approximately 5 percent of height and above geometric center). The Visual Hierarchy is then a way to put map symbols and elements based on significance order from the most prominent areas to the less ones respectively.
Looking around also has its own order. For someone who normally reads from left to right sides, he always moves his eyes from above left slantingly to Visual Center, the interest center, and finally to below right.

– As each element of map is differently significant, hierarchical significance is summarized as shown in the table. Map elements are then put by giving priority to the most significant element with highest area ratio to the smaller ones, respectively. In addition, map element that has the least significance must be at the least interesting area.

Hierarchical organization of map content has different significance, especially thematic map that has major content or heading presented on the map. It might be quantitative data such as soil types, land use or geographical data presented as quantitative data such as population size, and minor content consisting of background that might be line map or satellite data and aerial photograph. However, the background must be designed not to interrupt presented issues such as unnecessary detail delete, use of lighter color. The hierarchical organization has three main characteristics: stereograph, order and subdivision.