Radar has been developed between World War II in order to search location and route of airplanes from ground station. And use as navigator in bad weather condition. RADAR is abbreviation from “Radio Detection And Ranging.” RADAR is a measurement system that requires man-made energy source and transmit signal in microwave wavelength to target object and measure energy intensity which Backscatter to sensor, which is an active sensor system. Therefore, sensing or obtaining image from RADAR could take photograph both daytime and nighttime in all-weather conditions and able to pierce through cloud.

RADAR system that uses antenna installed on airborne and pointing at target object is called Side-Looking Radar : SLR or Side-Looking Airborne : SLAR. RADAR Resolution depends on size of antenna. Space-Based RADAR system began in 1987 when the United States of America launched SEASAT satellite. And after that there was the study of Space-Based RADAR system by Shuttle Imaging Radar : SIR continuously since 1980. In addition, there was ongoing development of RADAR system on satellite until present, for example, ERS JERS ENVISAT RADARSAT satellite and ALOS, etc.

Imaging RADAR system consist of Transmitter, Receiver, electronics equipment, and computer to assess and record data. Transmitter sends pulses of Microwave   energy in equal band and adjusts space by making the disk perpendicular to wave’s direction towards target in tilt angle. When RADAR hits target, signal will backscatter to Transmitter. Backscattered data in each time, intensity of signal, timing, and Incidence Angle on target which receives from sensor system will be calculated to locate target object. Image RADAR that assess will be strength of return signal which is level of image brightness.

Oblique aerial photography in the picture is perpendicular to flying direction which is called Range direction. As for flying direction, it is called Azimuth direction. Therefore, RADAR resolution consists of two directions. The main purpose of this chapter is to introduce overall RADAR fundamental, which is the basic in understanding RADAR system and briefly initial interaction of RADAR with target object, which is guideline for studying further detail. Since nowadays, data from Earth Observation Satellite which are data form RADARSAT satellite and ALOS satellite is data in active sensor system, image interpretation would be incorrect without the understanding in RADAR system and interaction between RADAR. At least this part is one of channels that those who are interested will be acknowledged moderately. In consequence, this presentation will be divided into main two subjects which are System parameters and Environment/ Target parameters.

From the equation, there is the main factor that affects the strength of backscattered energy which is Power transmitted, Antenna size, Geometric of photography, for instance, width of incident angle’s beam of light, and distance, etc.

RADAR wavelength is wavelength that is higher than brightness wave and heat wave, which in Remote Sensing technique is between 1 millimeter and 1 meter, which is Microwave wavelength (Picture 3.58). And mostly use a standard alphabet to describe wavelength accordingly to image by sorting from short to long that is Band Ka K Ku X C S L UHF and P, which shows relation between each Band and wavelength and frequency. 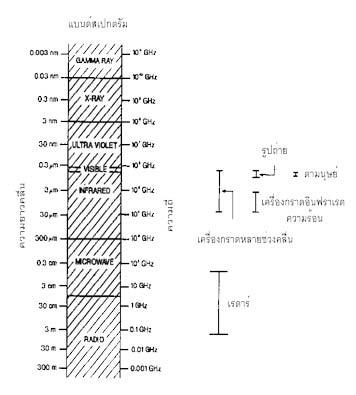 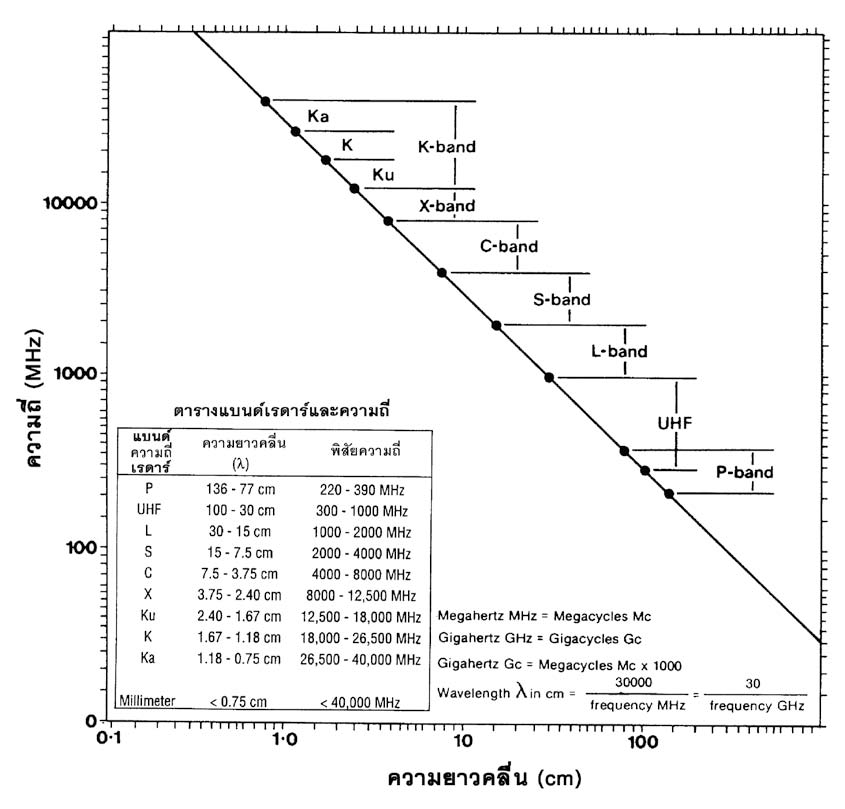 Resolution means capability of system that could separate two objects which is near to each other in RADAR system. Resolution will both define Range direction (cross orbit) and Azimuth direction (vertical trajectory). Detail is as follows.

LIA means angle between RADAR which incident on perpendicular with area slope in case of the area is steep.

On the contrary of Optical sensor, RADAR will capture a photo in Slant range, which is well-known that it is Oblique perspective. This type of photography is to send pulses to correlate with the Earth’s surface in increasing distance from RADAR’s Antenna and receive Range or image distance. Slant range is the distance between RADAR and reflection unit on surface, which is time measurement from the initial transmit until receiving back the signal to sensor machine. Raw data of RADAR that store data of Slant range which could be calculated from correlation.

SR     = Oblique Range
c      = Speed of light
t         = time between pulses sending and receiving back the signal
Those who want to use data which indicate more of Ground range data rather than Slant range, distance of Ground data is known as Ground range, which could calculate when knowing Incident angle (θ) as follows

At the beginning of imaging RADAR, RADAR system is photographing obliquely. It is RAR which has Antenna or signal dish that firmly attached on airborne. To develop a better resolution requires a large Antenna and decrease wave length; therefore, it is a huge problem and obstacle in Imaging RADAR. Later, there was development on SAR; decreasing the problem a lot. The difference of the two RADAR systems is acquiring Azimuth resolution. The resolution in Slant range is similar in any type of Imaging RADAR. For Azimuth resolution or flight line is different between RAR and SAR. RAR in Azimuth range depends on the size of Antenna. If require a clear resolution separation, it requires a large Antenna. As for SAR, continuous movement of Antenna and storing a certain target data are required. Collecting continuously by following specified time and then assesses to specify resolution. In SAR, it will synthesize beam width which is narrow, therefore, SAR system will use a short Antenna and able to use longer wave length; resulting a better resolution.

Shadow of RADAR shows the area which is not incident by RADAR. Therefore, RADAR receiver will not receive reflected signal in this area. Shadow will appear in black in RADAR image. In imaging RADAR, shadow will occur in range direction below and behind the high object. Shadow helps indicating imaging RADAR direction. If the description is incomplete or missing, shadow in RADAR could provide many sorts of data about RADAR, for example, distraction of the system, able to be beneficial use in high resolution image, and system analysis. Data regarding object’s height and interpreting area stature could be analyzed from image’s shadow.

The difference in the same position of the object appears in the overlapping images from photography angle is called Parallax. If there is much difference, the image could show clearer 3D. There are 3 types of Parallax of SAR system.

According to the fundamental of RADAR system, when transmitting the signal from Antenna to the target and receive the signal back. SAR will record data in each time that receive back the signal which is time, intensity, and position of receiver called Phase. When comparing the difference of Phase that record the return signal from the same position while there is movement that could calculate the different distance. Obtaining Spatial Elevation model is photography in one certain area but has different photography position. Imaging RADAR might has one side flight line or opposite 2 lines at the same height or has the same position in vertical line but the height of airborne is different. By using the difference of Phase, we can calculate the different of Spatial level which known as Differential Interferometry.

Signal used in imaging RADAR when incident on a variety of spatial angles which depends on Incident angle, specific Incident angle, and others. There will be Random Variability and usually   is a pixel in imaging RADAR called Speckle when receive the return signal to receiver which sometime is beneficial in interpretation. There are many ways to delete Speckle in Image filtering process.
In imaging RADAR analysis, besides Parameter of the system, environmental Parameter is highly essential in order to integrate with the system to gain knowledge in order to understand relation between RADAR system and the environment. Herein will describe about the environment or target that should be initially study which are Roughness characteristics, Dielectric propertiges, Angularity and Orientation of the target, Target spacing, Signal penetration, and Signal enhancement.

When flat surface, RADAR reflection will be Specular reflector that is having Incident angle equals to Reflection angle. Energy will reflect in other direction, not reflecting back to the recording system. When the roughness of the surface is increased, there will be some energy reflect back to the system. When there is a large number of a roughness, the reflection will be Diffuse reflector.

Roughness characteristics might be perceived in many levels which are Microscale, Mesoscale and  Macroscale. In Microscale usually specify Roughness characteristic to be equals to wave length. If the average Variance of the surface is less than 1/8, wave length is considered as flat surface, for example, L-band RADAR system has 15 centimeter wave length and 2 centimeter of Roughness characteristic; it is consequently considered as flat surface, etc. RADAR analysis considers Microscale as Image tone. As for Mesoscale, it is considered as the level of Image texture which the condition of the forest is a group of stature height of trees, resulting in some part of Backscattering to have high image brightness. There might be shadow occur in some part which is considered as arrangement that causing roughness trait. In Macroscale, the correlation level with the highly slope area condition or sloped mountain area facing the recording system will have vicious backscatter. When comparing roughness with wave length, it results on reflection element and backscatter. If there is a lot of roughness, there will be a large of backscatter. On the contrary if roughness is in low amount, it will backscatter in other direction.

3. Angularity and Orientation of the target

Short electromagnetic radiation has energy higher than long wavelength. Therefore, short wave has more interaction with the object. Hence, the ability in penetration is less than long wave which has less interaction with the object. Long wave is able to penetrate into the object more than short wave. The following table shows RADAR Band, wavelength, and ability in penetration into the surface of the area.

To increase backscattering or signal enhancement, it could be done by reducing wave length which is transmit from the system and reduce Incident angle. Reducing wave length will also decrease penetration ability. Those who requires to study underneath the surface, it requires the longer wave length. Therefore, signal enhancement requires a clear objective on what is the main thing to study, for example, in case of wanting to study flooded area where aquatic plant covering the area. If uses X band, the receiving data would be aquatic plant covering water surface. If uses the longer wave length such as L band, the receiving data would be data about flooding, etc.